Valve’s Portal could have just been a puzzle game set in a Cube-esque nightmare, but instead it elevated itself above the genre with its subtle narrative that had you play Chell, a silent woman escaping a malicious AI.

The sequel could have been a re-tread, why change a winning formula? But this is Valve, and Portal 2 is not a repeat but an evolution of everything that featured in the first chapter of Chell’s epic struggle against Aperture Science and their mind-taxing puzzles.

This darkly satirical sci-fi goes beyond mere puzzle antics, sending the player on a strong narrative. Picking up in the aftermath of Portal, you play the unfortunate Chell waking from suspended animation and having to contend with puzzles in destroyed environments with the help of a humorous spherical robot called Wheatley, voiced by the hilarious Stephen Merchant.

Not only are you dealing with puzzles in new environments, with new features implemented (such as the ability to create bridges, and utilise multi-coloured goop), but the narrative has you learning more about Aperture Science itself, with a particularly effective sequence throwing old school puzzle rooms replete with smarmy voice over by J.K. Simmons from the 50s to the 70s. 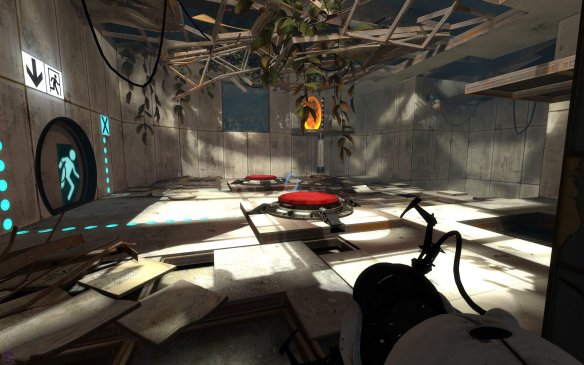 As you are forced to solve puzzles to escape the ridiculously mammoth complex, you will contend with shifting alliances, and face your nemesis GLaDOS who this time is fleshed out even more. Valve deserve kudos for not stretching out the mysteries in annoying JJ Abrams fashion, or even Valve’s own elusive G-Man. This time we get clear answers to the most pressing questions gamers have in mind when they think of Portal.

Who the hell are Aperture Science, where did they come from, what are they about, who is GLaDOS and why is she so crazy? The only question that isn’t answered is who is Chell, but strangely enough through our avatar’s interaction with Wheately and GLaDOS we do get a vague impression of what kind of person she is. Through our determination to get out of Aperture Science, we learn Chell’s determination. It’s very strange, but this mute character we only catch brief glimpses of is somehow a viable character. I’d say one of the best female characters in gaming, for all the crap she has to put up with, using her intelligence and determination to accomplish her goals.

By the time the game reaches its absolutely brilliant and epic climax, I was pumping my fist in the air. It’s a real crowd-pleasing moment, and totally unlike what you’d expect from a game that’s on the surface about a character solving puzzles to escape a subterranean environment. 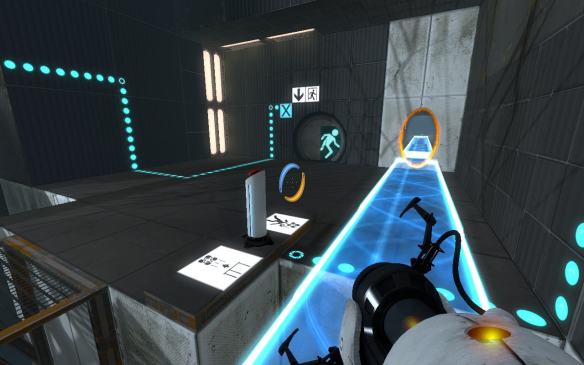 Speaking of the environment, it’s as surreal and utilitarian as ever, though with the added factor of the previous game’s climax having caused large scale destruction that is still in the process of being repaired.

The creepy frosted windows of in-accessible offices are ever-present, making you paranoid and strangely hopeful that a human might be inside observing you. You start to pine for Half-Life’s G-Man to briefly appear.

At some point the game begins to tease you with escape. Every time you stumble upon an elevator shaft leading to the surface, it’s unfortunately out of order. This happens repeatedly, it’s maddening, but continually sustains the tension, and your desire for fresh air and blue skies. You have to believe these things still exist up there.

The level designs get creepier and creepier, and are reminiscent of Tsutomu Nihei’s manga, especially Blame. Dark foreboding impossible structures, barren of life.

The structure is so vast and far-reaching, my mind would start wondering where the dead bodies were, surely there would be skeletons or uniforms, etc. Just a small detail, but I would have appreciated a few remnants of life other than inanimate objects and graffiti. 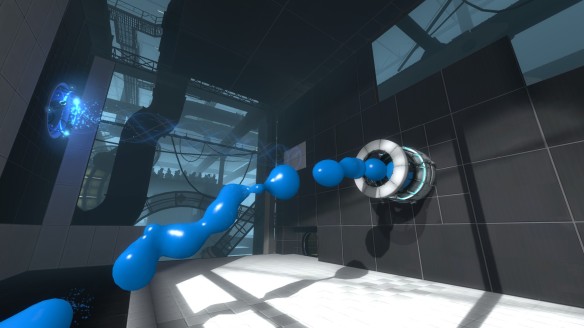 This game ultimately does what I wish TV show Lost would have, which is to descend into creepy dated laboratories with active experiments. Unfortunately Lost discarded with the Dharma Initiative, and went the fantasy route in the end. With Portal, Chell falls far below to the earliest buildings in Aperture Science’s history, and as we climb back up level by level we see the evolution of the company from the the 50s to 70s, the furniture and font in posters reflecting the era.

Portal 2 is a gaming experience unlike any other, except perhaps its predecessor, and amps everything to the max. The humour is constant and often laugh-out-loud funny, in fact I can’t stress how much I appreciate humour in a game, this current era has a dearth of laughs, everyone wants to be dark and edgy. The puzzles are tough enough to get you to work your brain, but not tough enough to send you to Google, truly. Every time I solved a puzzle I’d feel smarter for it. Thanks Valve!