I’ve saved the world so many times, it has lost meaning. Maybe it’s time to let the world burn for a change? 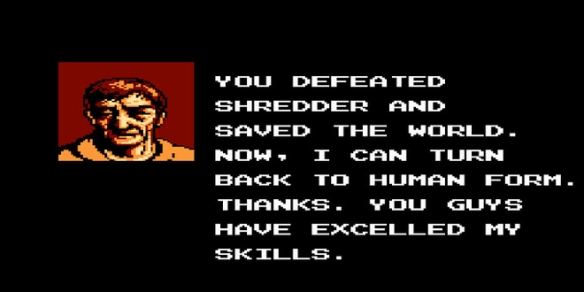 Video game screenwriters: I’ve saved the world so many times, it has lost meaning. When you do something repeatedly it becomes rote. Obligatory. You go through the motions. The concept of an end boss holding the fate of the planet in their hands is now predictable. Maybe it’s time to let the world burn for a change?

I’m weary of saving the world in the same way its become tiresome to see it in films. It’s not as compelling as interesting characters impacting each other’s lives. Indiana Jones saving the world from Nazis is engaging, not for his struggle to prevent them from getting the ark, but his relationship to Marion and Belloq. His interaction with other characters is what sells the whole endeavour. In a video game, having me wade through endless bad guys to finish with the Big Bad, ultimately feels stale. Sure the gameplay might have been awesome along the way, but if you’re going to force a player to travel along a narrative, then make sure the narrative is just as memorable as the gameplay.

“Don’t mind me ma’am, just off to save the world.”

Dead Space is great because you spend the entire game suffering, and know what is at stake for the rest of the universe. It’s not an idle threat, it’s a tangible one that’s been demonstrated in front of your eyeballs. By the time Dead Space 2 rolls around, saving the universe was almost an afterthought for me, I’d been plagued so badly by the necromorphs I took it personally and gladly stomped them out whenever I had the chance. It’s this kind of emotional engagement that keeps games entertaining and not mechanical like a game of Pong. Did the Dead Space games have to escalate the threat from surviving one ship to saving the universe? Not really, I was content with simply saving my own skin.

Often I would forget what the end destination of the Uncharted games was, because I was enjoying the banter between Drake and his friends too much. Saving Sully from sudden death in a destructible environment is infinitely more dramatic and exciting than facing off against a villain at the end to save the world.

What is the world anyway? In a game like Skyrim, that might mean something. Having conversed with hundreds of NPCs, the thought of some of them being squashed by a dragon with permanent death would mean something to the player. But in a linear game like Uncharted, it doesn’t mean anything except ‘world’ in the abstract sense.

“Saving one world is not enough, need more!”

We are saturated by the trope, we associate games with that plot.

The trope is holding the medium back. The games that are remembered for elevating the medium aren’t usually obsessed with saving the world. Portal, Braid, Journey, Shadow of the Colossus, etc. They’re considered masterpieces of the medium for a variety of reasons, but I think that not being beholden to the save-the-world trope helped free them up from being shackled to conventions and clichés.

What I want is deep, and personal conflicts. Set up a world in the first half of the game, lull me into a false sense of safety, then threaten to take it away from me. Lately gamers have had sidekicks to grow attached to, like Bioshock Infinite’s Elizabeth, and Last Of Us’ Ellie. Threatening perma-death on them is great motivation to take the explosive stuff happening on screen seriously.

“Dude, wait up. You’re saying there’s a world out there that needs saving? What a colossus waste of time!”

In an industry crammed with military shooters; of the likes of Call of Duty and Battlefield, we’re rendered as a multitude of ciphers, cogs in a machine. At least in 2010’s Medal Of Honor, flawed though it was, the narrative was more about sticking together as a group and surviving Afghanistan rather than a James Bond style impending world-ending plot. One of the missions consisted of you and your squad-mates surrounded by incoming Taliban, wave after wave, the destructible environment being reduced minute by minute, having to hold on until back-up arrived. It was incredibly tense, and hearing your squad-mates yell around you was hectic. It could have been the finale of the game if it had wanted to, it displayed the high-stakes and tension required of a third act climax.

While we’re discussing military shooters, another flawed game that made up for mediocre gameplay with a brilliant script was the underrated Spec Ops: The Line. An incredibly subversive meditation on accountability, collateral damage, and PTSD. A must-play military shooter for anyone remotely a fan of the genre.

In Spec Ops: The Line, never mind the world, you have to save your sanity.

Some of you have been reading this far and shaking your head, thinking of many exceptions to the rule; all those amazing games that had you saving the world. But I’m not saying we should rid the gaming medium from the save the world plot. It’s prevalent in all media from literature to films. but I think it should be used in moderation. When it’s implemented into a game’s narrative, it should surprise us with a new angle on the worn trope, and not just descend into killing thousands of bad guys to confront another bad guy.

I get that it’s cathartic and intrinsic to gaming history, but we can try to evolve a little and maybe create new avenues of gamer satisfaction. Developing characters we can interact and emphasise with, to care for. Saving them is an incredible accomplishment and really marks the game medium out from other industries.

I think writers need to keep gamers in mind when crafting tales. Gamers, not as individuals, but as a whole. Collectively we’re pros at saving the world, we’ve been there done that. Develop characters more. Who needs the world when you’ve got a friend in need?