Fighting the world for ten years to achieve a dream. To do something you enjoy for a living. Something you’re passionate about. From age 20 to 30, struggling against naysayers, against poverty, against every fucking obstacle society can throw at you to make you give up, to settle for less, for that shitty job you have no interest in. With no rich family to mooch off, Greta Gerwig’s 27 year old Frances has a dream to be a dancer, and she’s using every ounce of her infectious energy to make it a reality.

She’s due for a wakeup call though. We enter her life as she’s living with her best friend Sophie (Mickey Sumner), and the two are birds of a feather, so comfortable in each others presence, their coded language highlights the years spent in each others heads. But alas, a new and serious boyfriend is on the horizon for Sophie. Frances has just shambled out of a relationship of her own, she’s running out of cash for rent, the dance company she’s vying for hasn’t shown an interest in taking her on. In short, things are going into unhappy land, and before it’s all over, there will be yelling, running, vomiting, peeing on subway tracks, flying around the world for no reason and an aborted play-fight in a park.

This is a love story about friends. As life conspires to separate Frances from her best friend and send her crashing from one apartment to another, Gerwig plays her character as a skittish insecure woman who keeps stumbling into awkward conversations with denizens of glorious New York New York like a puppy tearing up a room with abandon. She’s just as adorable, Gerwig’s performance is genuinely warmhearted and despite the scatter-brained humour, captures the youthful desire for independence and accomplishment.

She’s on the periphery of wealth, her new flatmates nonchalant in their inability to obtain a permanent job, Frances takes a defensive tone when one guy tells her she’s insulting actual poor people by saying she’s poor. It’s an understandable point to make, but survival is relative. Struggling to maintain rent with no trust fund to fall back on is nothing to roll your eyes at. Frances to her credit is not a complainer though, she’s too oblivious for that kind of behaviour. Her only real problem is seeing her best friend slip away from her, which understandably causes her concern and drunken bouts of stubborn arguments. All part of the learning process. Frances has to hit rock bottom before she can pull up her socks and learn to walk her own path without her human-shaped comfort blanket Sophie. 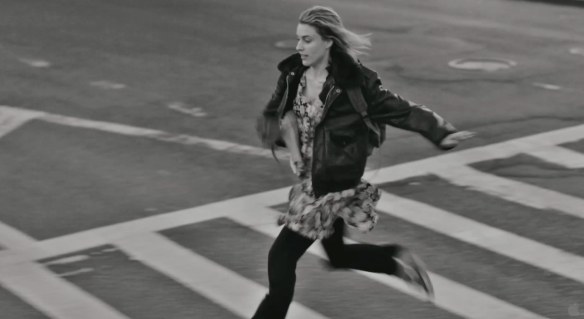 Though Baumbach’s films seem to be attributed to the ridiculous-sounding ‘mumblecore’ genre, this film is not obtuse or impenetrable. It’s accessible, full of crowd-pleasing slapstick and lines, tackling a popular rites of passage trope with a damn cool soundtrack (Bowie’s Modern Love being the main theme) and coupled with the black and white visual palette, New York continues to dazzle film-lovers with its sultry neon-drenched streets. The black and white visual style gives it a ‘classic’ feel. Gerwig has a near-constant halo of white light above her head, awkward angelic misfit that she is.

The film is economical with its editing, scenes never outstay their welcome. It’s a perfect balance, long enough to get a point across and short enough to not bore us with anything obligatory. This style is used for humour where we quick-cut away from ridiculous punchlines, and ultimately it ensures the momentum never lags.

Frances Ha speaks to dreamers, and wanderers. Navigating their way out of their 20s with a dream still alive inside them, and a friend to accompany them into a new decade. How can you resist watching this film after checking out this trailer? Ha.