An amazingly trippy visual hallucinogen injected into your eyeballs, this is a striking debut from a director with vision, following in the clinical footsteps of Kubrick.

Unlike the master director, Panos Cosmatos still has a way to go towards grabbing a viewer and keeping them glued throughout. This is such a writer/director film, as opposed to a director working off another’s script. It’s a common trap for directors to want ultimate control over as much of what is intrinsically a collaborative medium. As a result, a flawed film like this can occur, and tragic in this case, because I get the sense that if Cosmatos had worked in conjunction with another writer more focused on storytelling, while he focused on direction, we might have got a bonafide classic.

Gorgeous minimalism. Not so friendly though…

We’ll have to settle for a cult favourite, or perhaps not even cult, but obscure. The kind of film hipsters will namedrop into a conversation to appear cool. Because they’ll know it’s a film so unknown it never even reached Evil Dead levels of popularity in geek circles.

Stanley Kubrick’s characters were always compelling, no matter how detached the camera was, their emotions and the context they were in was always interesting, clear and coherent. Beyond The Black Rainbow unfortunately has regular intervals of lethargic scenes that sustain the mood to great effect, yet lose the viewer because quite frankly nothing interesting is occurring on screen.

It grabs you then lets go, grabs you then lets go. At a regular pace, which is exhausting and frustrating because the concept is brilliant. An 80’s set suspense mystery psychological horror about a young woman trapped in an underground lab by a taunting nemesis. The majority of the film is slow burning shots of a twitchy Barry (played by the fantastically creepy Michael Rogers) going about his way giving nonsensical dialogue and occasionally mistreating Elena (the angelic Eva Allan who does pretty well considering her lack of dialogue).

Mercifully the plot is simple and does not require charts and graphs to figure out, but the runtime could have been halved and nothing would have been lost. The last thirty minutes ramp up the narrative, with Elena crawling around ventilation shafts as if she’s traversing a level from Half-Life, which comes as a relief after putting up with the glacial and uninteresting bursts that littered the previous hour, and it all leads to a typically vague conclusion somewhat marred by a sudden and cheap climax. 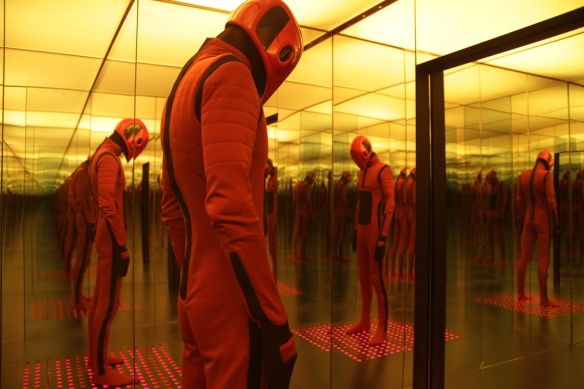 The most narcissistic lift ever.

The concept of this film is kind of where I wish the TV series Lost went. I wanted it to delve into obscure creepy science labs with experiments gone wrong. Unfortunately Lost went in another direction (and genre) entirely by the end.

Beyond the Black Rainbow is a worthy experiment, scored with a fantastic synth soundtrack by Jeremy Schmidt, dreamlike cinematography by Norm Li, absolutely brilliant production design from all the crew, and all directed with flair. I hope Cosmatos can collaborate with a decent writer to provide us with more unique yet strangely nostalgic visions.