The leap in quality from Primer to Upstream Color is substantial, visually, audially, direction, editing and acting are all excellent. Carruth still has a desire to play with the traditional concept of narrative leaving you pinned to the screen unblinking in the hopes of soaking up every second for fear of missing valuable information that is essential to understanding just what the hell is going on.

The first thirty minutes or so of this film are a brilliant introduction to the female protagonist, Kris, falling victim to a horrible crime that is later revealed to be one point of a cycle that has been going on for some time. There’s a creepy Kiyoshi Kurosawa vibe in this section as Kris is essentially made to suffer the ignominy of slavery, and then she is let go as suddenly as she was captured; left to fend for herself and with her life in shambles.

Not only is it a brilliant introduction to the film’s premise, themes and conceit, but to Amy Seimetz who has been acting for the last ten years in short and independent films. Here’s hoping for more mainstream work coming her way, she really commands the screen with her presence. You’re left intrigued, and worried for her character as she goes on a fraught journey that puts her through the ringer.

Carruth himself stars as Jeff, another troubled soul who dovetails with Kris in mind-confounding style. The closer they get, the more confusing things become, especially as Carruth chooses to cut to a third mysterious character at seemingly random moments. But the more you delve into the machinations of plot, the less random things are, and it all starts to make a weird kind of sense.

In what is becoming typical Carruth style, I was on board until the midway point where the film lost me with what felt like incoherence, and the longer I remained in the dark, the quicker I lost investment in the characters, whatever journey they were on and whatever the film was about.

It’s the kind of film that stays in the mind however and simmers away making you ask questions and figure out answers that the film infers. Discussing it with other viewers also helps shed light on the narrative (spoilers!) and ultimately the film becomes a simple thing to deconstruct and not as complicated as Carruth would have you believe. It’s just his style to make things as obscure as possible to avoid simple narrative structure. 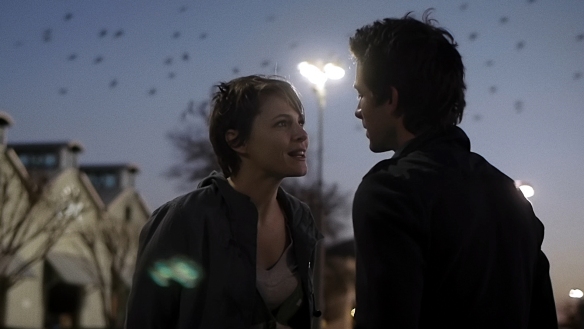 Though there’s nothing wrong with linear three-act screenplay structure, it is generally boring and predictable in the wrong hands. Carruth likes to experiment with storytelling method and for modern day viewers it can be a trying experience, but as long as the narrative does hold up to scrutiny, then his method is valid and shouldn’t be dismissed.

Upstream Color is a memorable study of characters coping in the aftermath of an identity-altering cycle that is taken advantage of by some, and shattered by others. Scored by Carruth himself in minimalist style that reminded me of Cliff Martinez’s Solaris soundtrack, the film is not something you just watch, it’s something you experience. I think this is Carruth’s ultimate filmmaking intention, and for lovers of film there’s probably no greater feeling when watching moving pictures.