It’s been more than fifty years since this film was released, and due to personal experience, I can successfully say that not much has changed in Japanese bureaucracy.

Kurosawa’s film opens with an introduction to Takashi Shimura’s creaky and barely alive Kanji Watanabe going about his humdrum life in a city office as head of Public Affairs. Robotically stamping documents and achieving absolutely nothing in the process, for himself nor for the citizens who in the opening sequence are complaining about sewage water overflowing in their street.

This man’s life is changed once he learns that he does not have long to live. The news sends him into a stunned depression, questioning what he’s been doing with his life all these years, and unable to confide to his son in a typically Japanese stoic manner, he ends up falling down a rabbit hole in an attempt to figure out what to do with the days he has left. 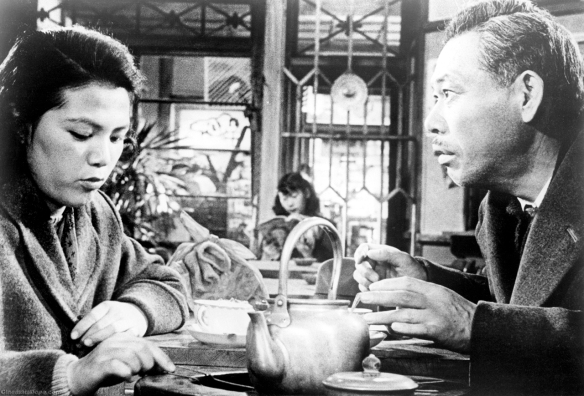 Kurosawa’s film has a brilliantly constructed script, with excellent usage of flashbacks in the latter half as Watanabe’s family and work colleagues try to piece together his erratic actions. They are ultimately inspired by his renewed sense of courage in the face of the Kafka-esque and Orwellian bureaucracy that stymies life for civilians. Kurosawa then kicks you in the balls with reality. It’s all well and good saying “Yeah, we should all be like Watanabe!” but then after the alcohol has worn off, you’re back in your humdrum office toeing the line, because why risk your job by sticking your neck out?

It’s a terribly bittersweet film with great direction throughout. There’s a great shot after Watanabe’s returning from his fateful trip to the doctor, that was homaged in Darren Aronofsky’s The Fountain.

What stood out to me the most from Ikiru is that the main character does not quit his shit job and pursue life’s beauty and wonder. No, instead he returns to his job with renewed enthusiasm. He wants to make his worthless job meaningful. He sees potential to affect the world around him, and through sheer will achieves the impossible, much to everyone’s disbelief.

Despite the low-key ending, and pathetic protagonist, it’s an inspiring film about the power of inner belief and leaving a lasting impression on this Earth after you’re gone.