Kurosawa’s ode to Shakespeare’s Macbeth follows the tale beat for beat in a Japanese context, set during the warring states period rife with betrayal and shifting alliances.

The film contains legitimately creepy shenanigans, making good use of light and dark, of shadow and fog. Some excellent special effects too, considering the era it was filmed in, with ghostly appearances and gory deaths.

Toshiro Mifune’s Washizu finds himself lost in Spider Forest with his friend Miki (Minoru Chiaki) where they encounter an evil spirit that reveals their impending fates. Washizu will become Lord of Forest Castle, and later Miki’s son will take over. They both laugh this encounter off, but sure enough the prophecy starts to come true. 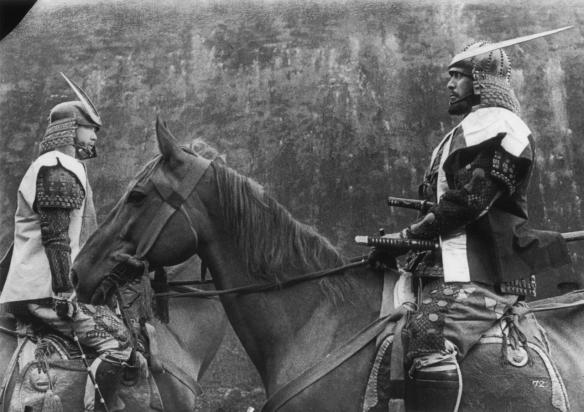 “You got something stuck to your helmet…”
“You too…”

Mifune is excellent as usual, the more films I see of his the higher he climbs on my list of all time favourite actors. Every glare and mannerism is steeped in character. Washizu is a confident man laid waste by inner turmoil and conflict, egged on by his wife to take advantage of the prophecy, but brought low by his own self. A skilled warrior on the outside yet weak-willed human on the inside.

I’ve always thought that if you put one person in a room it makes for little drama. You put two in and suddenly you’ve got endless possibilities of conflict. A world full of people is a chaotic maelstrom of clashing personalities. Throne of Blood encapsulates this sentiment, pitting man against man because human nature can barely contend with itself, let alone others.

Though the film was made in 1957, Spider Forest gives Sam Raimi’s Evil Dead forest a run for its money. However a sticking point for me is that there are too many long shots of horses trampling around, which saps the film of its pace. Its the only major flaw of the film lengthening it to lethargic levels. Just excising those shots would improve the film greatly.

“Tom Cruise The Last Samurai, I will find you!!!”

Throne of Blood remains a memorable entry in Kurosawa’s filmography for its timeless depiction of human folly, the power of ego and self-doubt, which all leads to one hell of a gory death, all the more powerful because of the actor’s real fear in the face of real arrows. Gotta love old-school filmmaking.