FFXIII got a lot of negative feedback upon release. By the time I got round to playing it I was expecting the worse. Instead, what I experienced was a passable and somewhat entertaining story told with style. Its major criticism was its linearity. The ‘corridor shooter’ of RPGs! Well, I’d rather that than an open world game with no story. (hello Dark Souls, ‘sup?)

RPGs should be focused on immersing you in a story, they should not be obsessed with statistics, collectables and convoluted gameplay. FFXIII could have been improved in quite a few ways, sure. But I appreciated the attention to detail, the fantastic soundtrack, the paradigm battle system was simple yet effective, giving the feeling of tactics whilst not taxing the brain. The game taught the battle and exploration concepts seamlessly and had an exhaustive help system. (seriously Dark Souls, ‘sup?)

With the amount of goodwill I read for its sequel which apparently catered to fan demands for an open world, I approached it with optimistic hope. Bad idea. Two hours in and I had lost hope completely.

It was one of those instances where you start something, and every five minutes your heart sinks with disappointment. “Oh no… no, why? Oh no.. wait, seriously?”

You can do it, put your back into it.

First off, starting the game with an epic battle that I have no investment in, not knowing what the stakes are, who I’m fighting or why, is such an inept way to start a story, let alone a game. It left me cold and cynical as to the direction of the game.

Then, the more I played, the more I could see the developers were catering to a demographic that loves what I loathe with a passion: collectible hunting & fetch/kill quests.

I’ve lamented the gaming medium’s preoccupation with fetch/kill quests previously, and it pains me to see it again. Though I wasn’t exactly expecting an FF game to buck trends dramatically, it’s still depressing that the only diversions from FFXIII-2’s main story is all about collecting items in the most convoluted non-enjoyable ways possible: go somewhere until you can’t progress, backtrack, go somewhere until you can’t progress, backtrack, try to fight monster, not strong enough, backtrack, grind for eternity. Plus fetching items/killing monsters for witless NPCs devoid of personality, emotion, common sense and any semblance of humanity.

The game is somewhat garnished with the concept of taming monsters you’ve fought (another form of collectible!), like a variation of Pokemon, then levelling them up as members of your team. Just grinding over and over again like an addict.

“Throw me again and I’ll bite your hand off. Kupo.”

A major diversion from its predecessor is the fact that this time round your main team only consists of two members: Lightning’s sister Serah and a random time-travelling dude with secrets who decides to help her for the entirety of the tale, which spanned 46 hours of game time for me, and who knows how many weeks or months of story-time for the characters. He is her companion for no compelling reason other than: “yeah, I don’t know you at all, we just met ten minutes ago but I’m going to make overbearing statements about how I’m going to protect you every five minutes till the end of the game” while somehow avoiding any kind of sexual tension at all (and no he’s not gay, just badly written).

The story is incoherent gibberish, even more so than usual for a FF game. It retcons the climax of FFXIII, and twists and turns it beyond recognition, such is the risk when you use time-travel in your story. There are fleeting moments of potential, seeing the impact of one timeline reverberate into another, seeing characters achieve the same goal while living in different eras, but that’s all this game is, just a collage of potentials, none of them realised.

At times our two protagonists cause so much havoc by travelling through time and changing events that they’re perceived to be the enemy, but its only briefly touched upon before being washed away with cliched bullshit. Of course you’re not the enemy, you’re two dimensional good guys fighting the weakest villain of the series.

FFXIII-2 is visually a step down from its predecessor, as if they’ve taken all the waste from FXIII archives and regurgitated it. Everything feels less smooth, less polished. Even the hair was animated better in FFXIII.

The soundtrack is mostly awful whenever it’s not re-using FFXIII’s awesome music. I love FFXIII’s soundtrack, do you know how hard it is to make music that doesn’t remind you of anything on Earth!? In FFXIII-2, at one point I hopped on a red chocobo to travel the Archlyte Steppe and suddenly a laughably shitty faux-neo metal type track started blaring in my headphones. Surely the lowest point of the franchise. 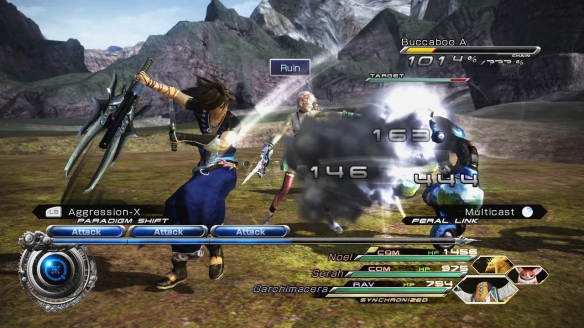 I pretty much only used a medic monster the entire game.

Fighting optional bosses was an afterthought in FFXIII, but it’s pushed to the forefront with its sequel, giving you the opportunity to tame them or collect a fragment collectable from their corpse.

FFXIII-2 has somehow inexplicably dumbed down the crystarium levelling up system, and made it overly complicated at the same time. You still receive CP by killing monsters and advance through a constellation type maze to level up various areas of expertise such as ‘commando’ or ‘ravager’ but the aesthetic design was needlessly revamped so at first you’re not quite sure who or what you’re levelling up, or more crucially what ability you’re levelling up towards. Whoever redesigned it needs to stay the hell away from the franchise.

What was hailed as non-linearity; what the witless fan base was foaming at the mouth for, is presented here via time portals that make you revisit levels from the first game, in an albeit creative way because you’re visiting them in different time periods, however thanks to the shit writing, it’s not as fun or creative as it could have been.

You often encounter NPCs who give the most turgid pithy dialogue, “wait, how did you find that broken tablet I asked you for? OMG, you went back in time!” etc, etc.

The more I think about this game the more annoyed I get with the writing, it’s written for ten year olds, so hackneyed and trite, so obvious, so hand-holding, it’s infuriating.

It’s not a future city unless there’s flying cars and corruption in the air.

My favourite part of the game was a future city called Academia, which is basically the city from The Fifth Element, but Final Fantasy style. I wish the game was mostly set in this futurescape, it’s my favourite style of speculative future city vision. Flying cars, neon lights!

So after 46 hours, my journey in FFXIII-2 led up to another typically difficult FF final boss battle that I struggled with a tad, even though I had nearly all combat roles maxed out. This is not a complaint though, as I enjoyed the challenge. The story also ends on a massive and dark cliffhanger that had me scratching my head thanks to the story being completely random and arbitrary in true FF fashion. I mean, it makes internal sense, but requires a lot of hand-holding, terrible exposition, and the usual suspension of disbelief to get there.

Of all its faults, the lack of a strong story and dialogue is what ruined this game for me beyond redemption, it’s the game’s biggest crime. RPGs are meant to be about the narrative above and beyond anything else. Otherwise it’s not an RPG, you may as well call it something else, a strategy adventure game.

Lately I’ve been very disappointed by RPGs. Skyrim had a painfully generic story that was almost as bad as FFXIII-2’s. Dragon Age is nothing without Tolkien’s influence, not so much wearing it on its sleeve but rather wearing it like Leslie Nielson wearing a full-body condom in a Naked Gun movie. Demon Souls and Dark Souls have no narrative at all! How ironic it is then, that the strongest stories this generation have come from other genres entirely: Uncharted series, Dead Space, Grand Theft Auto 4, Red Dead Redemption, Max Payne 3, Spec Ops: The Line. Any of them RPGs? Nope.

I approach FFXIII-3 with massive heaps of trepidation and am slowly finding myself in the ranks of fans who have a dismissive attitude to Square Enix. It seems their pioneering days are long behind them as they struggle to hold onto tradition while catering to the whims of their current fan base. I wish they’d just ignore all this and concentrate on bringing us a great story well told.