Coming from a moderate fan of Demons Souls, I was hoping that its quasi-sequel Dark Souls would improve on some of the flaws of that game. Namely, its depthless obscurity. Its inability to teach the gamer how to do basic things or understand basic concepts. Theoretically you could have played that entire game without knowing how to use magic, because you had no idea where a certain NPC was and could have missed them.

Dark Souls does not change this incredibly annoying inability of From Software to make a coherent game. The game is so obscure it’s utterly infuriating having to google questions almost every five minutes.

Here’s a rundown of what I once googled in the space of 30 mins, my gameplay constantly being interrupted:

What is humanity how to use it?
How can I tell if I’m hollow + benefits?
What does kindling do?
How to jump?
Why can’t I compare merchant weapon stats with owned weapons?
What are dragon remnants?
What is fire keeper soul?
Why can’t I hit invading phantoms?
Where can I find + use magic/miracles?

Dark Souls comes with a little manual booklet. It explains what the controls are, and blesses the reader with a few paragraphs that briefly touches on core concepts such as humanity, bonfires and souls.

But playing the game, you will be completely and utterly lost. Some fans will say that is the point of the game, to be lost, alone and afraid.

I don’t think they know what they’re talking about. The mood of the game should make you feel that way through aesthetics, narrative and sound design. The game shouldn’t make you run to Google to ask such basic questions like “how do I buy equipment, level it and use magic?”

Through Google I discovered that I had to talk to an NPC three freakin times before he will offer to teach miracles. I’d only talked to him twice before running to Google for answers. Seriously!? 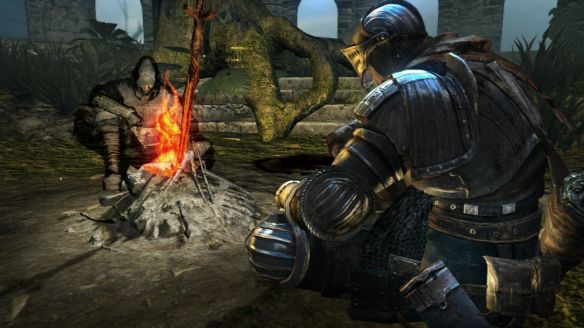 “I thought they were gonna give me an Amazon Kindle. Sigh.”

Eventually one may find the answers to these questions plaguing you throughout the game, if you chose not to use google, but only after hundreds of hours of trial and error, and not the sort the game promotes.

I’m NOT asking to have my hand held. I don’t need an initial level tutoring me on how to fight, level up, save, and craft. Though it would be welcome, but more importantly what the user needs is precedent, examples and clear signposts, even if they’re pointing towards a goal or idea. I don’t need a literal sign post saying “merchant this way”, but just a hint that merchants actually fucking exist in this world and where they might be found.

Near the beginning, an NPC says two bells need to be rung. Ok, that’s fine, I don’t need to know where, but at least I know a bell above and below need to be rung. That’s the kind of hint I ask for, but it’s few and far between when the game decides to provide you with a morsel of information. There’s a mute lady near him who does nothing when you attempt to talk to her, but aha, if you talk to her with a specific item she’ll do something.

a) no way to discern this.
b) if you knew this, but not what item, then would you have to literally trek to her every time you found a new item to see if she would do anything?
c) without websites unaffiliated with From Sofware, you’d go the entire game without knowing about her ability to enhance your healing flasks.

Horrendous bad game design, dressed up as ambiguity, and devoured by fans as intentional genius. I believe it’s simply incompetent and lazy. Unacceptable.  Tomohiro Shibuya’s comments on making Dark Souls II more ‘accessible’ are a step in the right direction, no matter what the fans think. While they spend hundreds of hours on websites researching how to develop effective character builds, I’m hoping the next game will have a FAQ button. (which knowing my luck, and From Software’s history, will lead me to an un-official Wiki page)

I have nothing against people who enjoy the way Demons Souls and Dark Souls makes them depend on websites to make sense of the game, but I get annoyed when they refuse to accept any criticism. The only thing fuelling their staunch loyalty is great and addictive gameplay. Without this, even the fans would be irritated that the game itself can’t do what numerous fan-made websites can, which is make sense of the game itself.

I won’t even bother dwelling on the laughable attempt at a story. What I will end with is this: I love games with narrative or games in open sandbox worlds. Dark Souls has neither and is testing my patience, surprisingly not with its difficulty (which is challenging in a good way), but with its inability to show me how to use its features.