Comparisons to that other pinnacle of martial arts video game adaptations, Mortal Kombat, are inevitable, but I can successfully say that Dead or Alive blows it out of the bikini-filled water.

Anybody expecting anything other than a cheesy fight-fest from this movie is just naive or being difficult just for the sake of it. It’s based on a fighting game franchise that barely has a story holding the seams together and features girls with breasts that weigh more than the rest of their bodies.

What elevated Corey Yuen’s DOA is a combination of excellent casting, genuinely entertaining fight choreography and the right tone. It’s a movie obviously not taking things seriously, but also not throwing all sense out the window either. It’s trying for a very specific balance between playful, teasing, and action-packed. 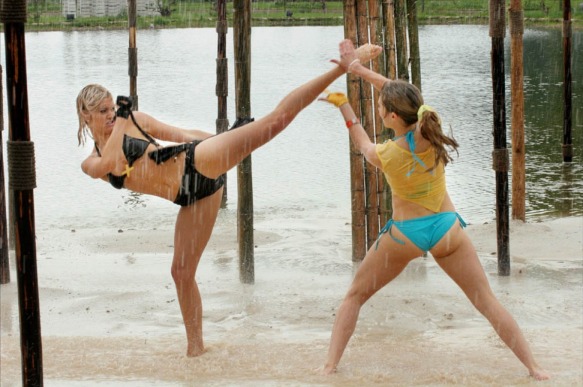 Jellyfish on my foot, get rid of it! AAIIEE!

We have a variety of characters, the standouts being women, staying true to the DOA franchise, spearheaded by Devon Aoki, Jaime Pressly and Holly Valance. All tackle their roles with relish. You’ve got the serious Kasumi (Aoki) escaping her ninja clan in a ridiculously awesome manner to find out the truth behind her brother’s death in the previous DOA tournament. Tina (Pressly) has arrived with her dad in tow, wanting to prove her fighting skills, leading to misadventure and misunderstanding. Finally, the smoking hot Christie (Valance) slinks around the place as a thief with her eyes on the prize.

Eric Roberts classes things up with his appearance as the tournament organiser, complete with bad wig and piggy evil eyes from the get-go. Though as much as I love the guy, the only disappointment is that they didn’t cast an actual martial artist for the main villain role, instead opting for an actor with screen presence. Which although is not a bad thing as he makes a great scene-chomping sleazebag, and Yuen manages to still give the illusion of him fighting six people at the same time through judicious use of quick cuts and the bad wig hiding the face of the stuntman.

The battle for the future of humanity will be decided…with volleyball!

Other pleasantly surprising cameos for this underrated gem of a movie are Brian White (The Shield), and Collin Chou (Flash Point).

Maybe I’m so generous with this movie because I have a soft spot for strong butt-kicking women who know how to do roundhouse kicks and be thrown through glass windows into walls. I also love happy-go-lucky attitudes despite all of the above occurring. Plus Corey Yuen is a decent director of action, he is the masterstroke behind the assembling of the team for this adaptation. Any other director would not have been able to bring together such a number and variety of satisfying fights, ranging from swordplay, one-on-one punch-fests in the rain, wire-fu in forests, you name it and it features during the runtime.

This is how I floss. Seriously. Stop looking at me like that.

If you’re a martial arts fan, and you’ve got nothing pressing to watch, and you want to see a volleyball punctured with a ninja star, then you can’t go wrong with DOA.