Daniel Day-Lewis has reached such dizzying heights in his chosen profession that the extras in this film aren’t even acting, they’re genuinely awestruck in his presence.  Mumbling their lines with puppy dog faces while hyperventilating, “Yes Mr…Lincoln…”

Steven Spielberg’s biopic avoids most of the pitfalls of the genre, this is no rags to riches tale, there’s no predictable passage of time depicting a child growing up and learning life’s lessons along the way.  Instead we join Lincoln amidst the United States’ civil war that almost ripped the country apart.

Lincoln also attempts to humanise the titular character (giving him an authentic voice in contrast to the stereotypical baritone) and renders him as just a man in a precarious situation fighting to stay true to his vision despite obstacles and even solutions showing themselves.  The most interesting aspect of Lincoln’s tenure as President was resolving a war and outlawing slavery, with the latter’s chance of success wholly dependant on the former continuing for long enough for congress to pass the required amendment.

The hook being that Lincoln must struggle with the idea that sacrificing lives in an ugly war may be worth it if slavery can be abolished from the country.  If peace arrives too soon however, then the south has the potential to stop the law being passed.  It’s a great hook, and Day-Lewis utterly sells the tumultuous soul-searching of Lincoln.  Surrounded as he is by different factions with different aims, some astonished by his stubborn refusal to give in to peace so easily.

So far you’d imagine Lincoln to be a dry and serious endeavour with nary a smile in sight, but you’d be incorrect because Spielberg follows the excellent hook with a great ensemble cast that delivers line after line of amazingly witty and humorous dialogue.  We’re amongst intelligent lawmakers and a few rabble-rousers, all colliding at once and with a lot to lose.

David Strathairn gives a strong supporting presence to Day-Lewis as Lincoln’s Secretary of State, though he’s overshadowed by scenery-munching Tommy Lee Jones as Thaddeus Stevens.  Other stellar actors roped in by Spielberg are a seemingly reinvigorated Sally Field giving all she’s got as Lincoln’s melodramatic wife, and the ever dependable Joseph Gordon-Lewitt as his son with whom he has a rocky relationship.

A special mention must go to three character actors who have so much fun with their material they should have their own spin-off film charting the misadventures of dodgy fixers who roam 19th century USA buying votes.  James Spader, John Hawkins, and Tim Blake Nelson are comedic geniuses that give the film a breezy nature, parting the dark clouds periodically ensuring the troubled Lincoln doesn’t make you mopey. 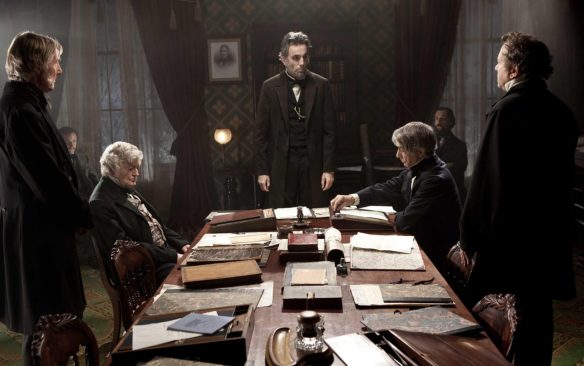 Anyone want pizza? I’ll order pizza. Tuna and pineapple? Anyone?

Comparisons to Spielberg’s largely (and unfairly) unloved Amistad are going to be inevitable, the story revolving around the issue of race and human rights in US history, courtroom scenes featuring blistering dialogue and weird wigs.  Though Spielberg’s sentimentality is kept in check somewhat, at least compared to War Horse which was overflowing with the gooey stuff, but Lincoln does begin to outstay its welcome.

i’ve mentioned this before elsewhere, but Hollywood screenwriters and directors are increasingly becoming incapable of ending their stories in a timely fashion, not willing to close the curtain but instead keep things going for as long as possible.  Lincoln doesn’t extend its epilogue too much, but still for many I think the ending actually occurs about ten minutes or so before the moment when Spielberg finally decides to call it a day and let the credits roll.

I don’t know how accurate Lincoln is, but it’s an irrelevant thing to ponder anyway.  Film is a collaborative process bringing to motion a viewpoint.  Spielberg’s film is a unique cinematic take on the mythic figure, both bringing him down to earth and ensuring he’s still on a pedestal.